Unless you’re happy to leave things to chance, I think it’s a great idea to discuss with your celebrant, prior to your big day, all the little details that go into making up your ceremony. It helps to make things seamless on the day and takes away any niggling questions you may have.

The exchange of wedding rings is not essential for a marriage to be considered legal in Australia but, more often than not, it will form part of most ceremonies. One of the things I discuss with each couple is how they plan to present the ring/s. The key options are:

The first thing to remember is that there are no rules. If you have  chosen to have a Best Man, traditionally, one of his jobs will be to safely keep your ring/s in his pocket until called forward by the Celebrant to present them. Assuming both the bride and groom will be exchanging wedding rings, if they do not have a double ring box, I suggest they place one ring into the slit in one box and put the other ring over it so that it’s held in place. The Best Man then has only one box to open and won’t need to perform a juggling act opening two.

If you choose to have one or more Ring Bearers, your ring/s can be softly tied to a ring pillow, for instance, or kept safely inside a ring box. Some younger Ring Bearers carry fake rings down the aisle and, rather than standing with the other members of the bridal party, sit with family and friends during the ceremony itself. If your Ring Bearer is very young, you could also choose for them to carry a cute sign down the aisle while a relative safely looks after the rings. Then, when the rings are to be presented, the relative could help the Ring Bearer to do so at the appropriate time. 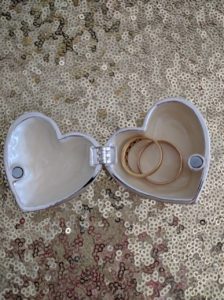 If you choose not to have a Best Man (the groom may have the rings in his pocket or you may choose to ask a family member or friend to bring them forward at the appropriate time), you could place them in a special ring dish which has been left on the signing table. The Celebrant could step over to retrieve the dish just prior to the ring exchange and then present it to the bride and groom so that they can select their partner’s ring.

Traditionally, the wedding ring is worn on the third finger of the left hand for both the bride and groom. In the case of the bride, it is placed on her finger first and is followed by her engagement ring. For this reason, I often suggest brides place their engagement ring on the third finger of their right hand on their wedding day. Once they are married, they can transfer their engagement ring back over to their left hand so that it sits in the traditional place just above the wedding ring.

♥  Warming of the rings

Some couples choose to have an extra ritual called a Warming of the Rings as part of their wedding ceremony. They could ask their Ring Bearer/s or appoint someone else to pass their rings inside a chiffon bag, for instance, amongst family and friends while the ceremony is taking place. In this way, they can be infused with love and good wishes before being brought forward for the bride and groom to exchange.

If this does not form part of your ceremony, I will include my own version of a Warming of the Rings between the bride and groom just before they exchange their rings.

If, for some reason, your rings are not available in time for your ceremony (perhaps there was insufficient time for them to be made), you could (for the time being) exchange rings which are family heirlooms, exchange silicone rings (often favoured by tradies) or take part in a Red String ritual.

The red string ring or bracelet is worn by practitioners of different faiths. It is usually made of wool, sometimes with seven knots tied into it, as seven is deemed to be a lucky number. It is often worn by Hindus, Buddhists, Christians and those who practise Kabbalah. In Chinese folklore, “the red string of fate” is seen as a magical connection between two people who are destined to be soul mates regardless of time, place or circumstance. If you are interested in incorporating a Red String ritual, I will write some special words as part of your ceremony to explain the symbolism behind it.

Whichever method you choose, I love the concept of “hand to heart” which means that, on your wedding day, only the couple touch their rings. After all, they are the outward symbol of the promises you are making to each other and, as such, are sacred. Hold fast to these moments for they are worthy of reflection for many years to come.